I'm an Electrical Engineer and System Architect focused on building products and projects that empower people to create.

Check out my book!

As an Amazon Associate, I earn from qualifying purchases if you purchase items via Amazon.com links on this website. 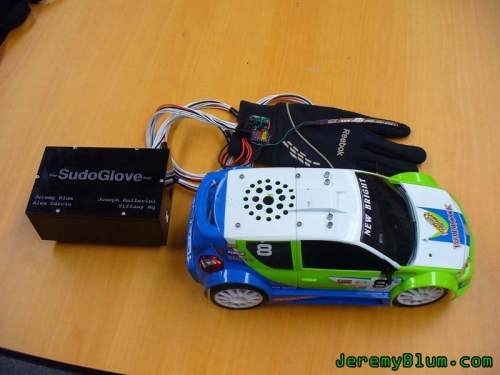 Update 5/19/10 – I have uploaded the final report, code, schematics, laser-cutting files, and sound effects!  Read on to download them.

Introducing the SudoGlove Control System!  This is my final project for INFO4320 at Cornell Engineering.  It was developed by me and three other students: Joe Ballerini, Tiffany Ng, and Alex Garcia.  You get geek points if you can figure out why we decided to call it the SudoGlove.  Here’s a hint…

SudoGlove aims to bridge the gap between the user and traditional physical hardware devices. Given the high learning curve in understanding how to use foreign technologies, we hope to break away from conventional control mechanisms and explore an intuitive way to control these devices. SudoGlove provides a tangible interface that relies on hand gestures to wirelessly control any device or software. By removing the distance between the user and traditional hardware devices, our goal is for SudoGlove to feel more like an extension of the body as opposed to an external machine.

As an investigation into this idea, the goal of this project is to capture simple hand gestures from the SudoGlove and use that input to wirelessly control a modified RC car. Controlled variables include speed, steering, forward/reverse, headlights, siren lights, siren sounds, and a horn using a combination of flex, force, vibration, and gyroscopic sensors.

Read on for a demonstration video, photo gallery, additional information, and downloadable content!

We’re crazy engineers and there’s no telling what we may do next!

SYSTEM COMPONENTS
The SudoGlove Control system consists of three main components: The actual glove, the control pack, and the RC car.  The glove is a standard Reebok glove with 5 sensors sewn in.  The sensors include a flex sensor on the index finger, two force sensors on the ring and pinky fingers, a vibration sensor in the palm, and a two dimensional gyroscope on the wrist.  A small protoboard houses 3 status LEDs, and a connector for the 12-conductor wire that goes to the control pack.

The control pack contains an arduino mega, prototyping shield, XBee and XBee shield, 9V Battery, illuminated power switch and a connection for the glove.  The case was designed in the Alibre Cad program and laser-cut using the Epilog Laser in Cornell’s Computational Synthesis Lab.  The top of the box was etched using this laser as well.

The final system component is the RC car.  We removed all the original electronics and kept just the two motors and the chassis.  An XBee wireless module receives commands from the glove, and an arduino pro mini processes these and tells the car what to do.   An H-Bridge is commanded by the arduino and drives the motors in the appropriate directions.  We modified the car chassis to include 2 headlights, 4 siren lights, and speaker for playing sound effects.  The speaker is controlled by a SOMO audio module which communicates with the arduino as well.

SOURCE CODE, SCHEMATICS, AND DESIGNS
These materials are made available via a Creative Commons Attribution-ShareAlike 3.0 Unported License. Feel free to modify and improve upon these materials as much as you like, but share your improvements and credit myself, Joe Ballerini, Alex Garcia, and Tiffany Ng as the original authors.

This site uses Akismet to reduce spam. Learn how your comment data is processed.